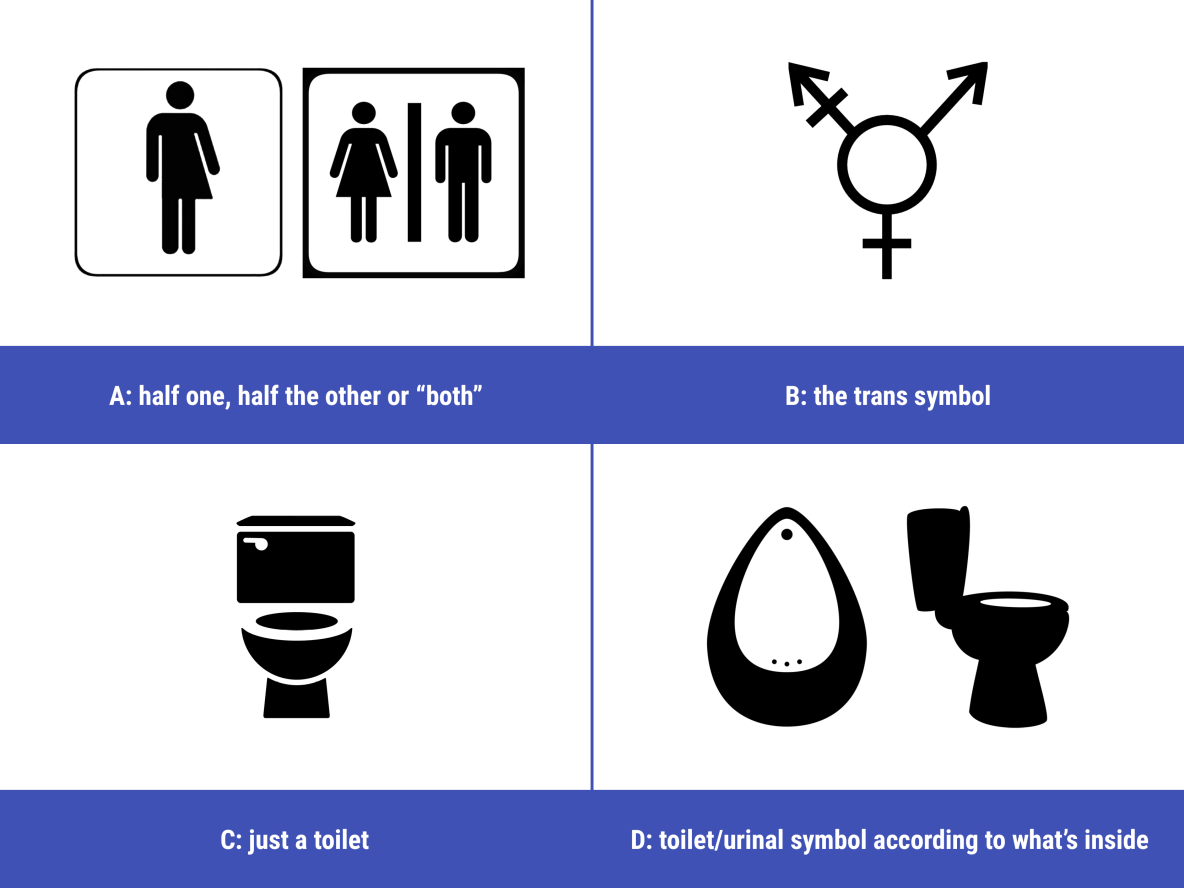 It's fantastic to see more and more gender-neutral (or gender-inclusive) toilets showing up as awareness rises of the need to make peeing a safe experience for all. However, care must be taken when selecting a sign to put on the door. These signs can be problematic in a number of ways, so it's good to think about the issues introduced by different forms of symbolic and iconic (visual) representation, rather than just opting for whatever seems popular on a Google search. Whilst put up with great intentions, many gender-neutral toilet signs are counter-productive. They can undermine what they're trying to communicate, or create new barriers based on culture and/or linguistic knowledge (or repertoire).

There are (at least) two key factors:

At Everyday Cissexism we conducted a poll via Twitter. I put together a graphic with four common and alternative options (as above)1 then we asked which of the four was preferable via a poll (embedded below). The poll was totally loaded (based on sound sociopolitical reasoning, of course), but the results and the discussion on both tweets are clear and conclusive: people hate the half one, half the other or "both" options and prefer visual reference to gender to be taken out altogether, favouring either a toilet or a toilet and/or urinal corresponding to what's inside the room. I'll cover some of the reasons why as I discuss these and other options below.

Many feel half one, half the other gender-neutral toilet signs reiterate binaries. Which do you prefer? Examples in previous tweet/below.

The issue here is that these do not visually represent neutrality/inclusivity: they represent or at least evoke two genders. Having two distinct figures, typically read/understood in isolation to be representative of "female" and "male", essentially re-articulates the binary. Splitting the two figures down the middle and sticking them together is problematic in the same way, but it can also - by association - lead to a highly problematic reading of non-binary people being half one, half the other. Whilst most non-binary people would probably get the intended message behind these signs, using them doesn't provide confidence that those putting them up really get, or have thought about, what gender-neutral toilets are all about - or one of the key reasons why they're necessary (non-binary people exist!).

This option is represented by option A in the poll - see the image at the top.

This fails on two counts. Firstly, it's not easy to work out what the symbol represents - you need to be told or introduced to it in the context of learning about trans stuff. If you'd never seen it before and didn't know there was a trans symbol, it wouldn't be obvious what it means. I doubt even the binary gender symbols ( and ) have a high level of awareness on a global level, and - unlike the body figures - they bear no relation to stereotypes of gendered presentation (they are symbolic, not iconic or indexical), so you need cultural knowledge to successfully understand the message. However, even if you know what the symbol means, like the previous options it fails to convey neutrality/inclusivity. It actually conveys "toilet for trans people", which is not really what most trans people are after! We don't want separate toilets, we want neutral/inclusive toilets - toilets for everyone - as well as acceptance of trans women and trans men in female and male toilets respectively.

This option is represented by option B in the poll - see the image at the top.

Advice: avoid (or combine with symbol)

This is quite a common sign for unintentionally gender-neutral toilets - where those putting up the sign haven't actively tried to make their toilets accessible to people of any gender, but through shortage of space can only provide one toilet and have chosen to label it with a word, rather than two gender-coded body symbols. Unfortunately, both of these fail as transcultural communication. Yes, English is a very global language these days as a result of global power dynamics, colonialism and so on, and in context most people who speak little or no English could probably understand "Toilet", but there will be exceptions so if we have a more culturally inclusive option we should use it. If someone who spoke no Greek encountered two doors, one labelled "Tουαλέτα" and the other "Προσωπικό", would they work out that the first is a toilet and the second the staff room? Maybe, but not everyone would. "Unisex" and "WC" have similar linguistic limitations; the latter also requires knowledge that "WC" (which from my own observations is decreasingly common) means toilet (or water closet, and that this means toilet).

Additional note: including the word "Toilet" alongside a symbol is relatively unproblematic so a combined text and symbol approach is an option.

This works great. It tells you that it's a toilet by representing a toilet. Yes, toilet design isn't universal, but it's not far off and a toilet icon should have very high recognition levels among people likely to be looking for an indoor toilet. Crucially, it takes gender out of the equation altogether. There is no obvious way of representing gender neutrality/inclusivity using visual representation of the body without problematically remixing stereotypes and norms of gendered presentation, especially given that an unembellished, plain body would generally be read as "male" (see the article linked in the notes section for more on male as the default2), and a three-way distinction between female, male and non-binary would require some universal and essentialist notion of non-binary presentation. Essentially gender-neutral toilets are about making someone's gender not a factor that determines whether they can enter, much like age, class, race etc. We needn't represent age, class and race neutrality/inclusivity by having different categorical icons or symbols representing various sub-divisions - the same applies for gender. It is gender neutral/inclusive by virtue of the fact that there is no reference to gender.

This option is represented by option C in the poll - see the image at the top. Note that this particular image is from a source who has a problematic history with regard to gender activism (see The genderbread plagiarist [update: no longer available]), so you might want to use an alternative. Here are a few: 1 | 2 | 3 | 4 | 5

5: Sit-down toilet and/or urinal symbols according to what's inside

This has all the benefits of the toilet symbol, but also makes clear what's actually on the inside, particularly useful when previously female or male toilets have been neutralised on the outside but remain unchanged on the inside. Of course, gender isn't a factor in whether people can use sit-down toilets but male toilets tend to have less of these. Male toilets also tend to have people using urinals, which may be an uncomfortable sight for people unaccustomed to this phenomenon, so indicating whether a room has urinals or not can help people avoid unpleasant situations.

Additional note: it's also very helpful to indicate whether menstrual hygiene bins are inside. Unfortunately as far as I know there's no established symbol for this and so text may be the only option, rendering the transcrultural communication barrier unavoidable.

This option is represented by option D in the poll - see the image at the top. The source is Bobbu on DeviantArt.

Many thanks to Kit Heyam for helping to make this article more accessible to a general audience! If you're in a workplace or some other group of people who might benefit from trans awareness training, I highly recommend his services. See his website for more details.

1 I don't own the copyright to any of the constituent images used in the poll graphic; some are public domain, others at least widely used - let me know if I used something you made without credit and I'll happily add it or replace the image if preferred.

2 Further reading: [content warning: one potentially cisnormative statement regarding bodies by the author in an otherwise very trans-inclusive and trans-aware article; embedded sex-based images that are at least cisnormative, arguably transphobic, but with a warning right before; reference to sexual predaciousness/rape culture] this article from Sociological Images on gender and toilet signs is very interesting, also covering femininity, masculinity, sex and sexuality, with plenty of commentary on trans inclusivity: Go where? Sex, gender and toilets.