Unrequited hate and the hierarchies of evil 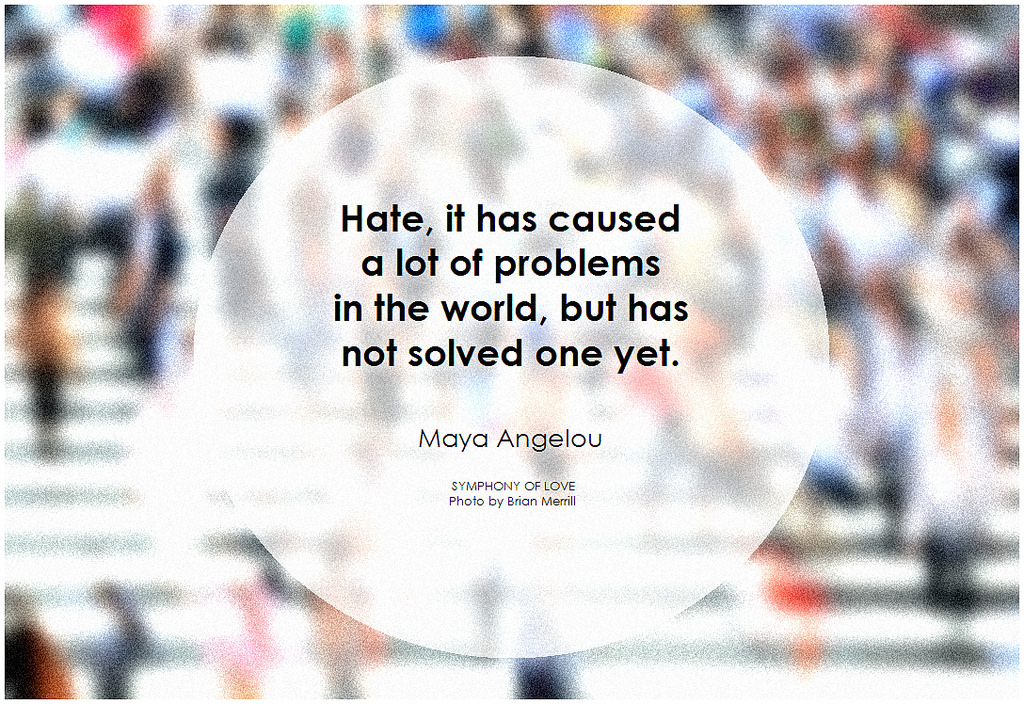 Our cultural memory is flawed if we universally dislike anyone who dislikes us, or anyone who commits an act we consider to be evil. We need only travel back decades, not centuries, to find a time when it was the norm to 'disagree' with homosexuality. Are today’s younger generations filled with hatred at the very thought of their close ancestors who were part of this very recent society? Or rather, do they acknowledge their flaws as products of their context?

It’s easy to dismiss the flaws of the past in the present, but the fact that these flaws are so recent should be seen as evidence that we are not in some kind of post-inequality society where discrimination is all behind us, one where everything is just fine because women can vote, same-sex couples can get married and trans people can get Gender Recognition Certificates. The last two of these rights are post-millennial advancements (and neither are without flaw). The fact is we are often unaware of our flaws until we have surpassed them, so should we be looking down on other cultures for not having surpassed flaws that we exemplified a matter of years, decades or centuries ago? Or should we rather acknowledge that cultural norms are deeply-rooted matters (as a result of conditioning from childhood and so on) that are resultantly incredibly difficult and slow to change? Our social nature means that conformity is inherent, which means that deviance is challenging, which means that change is slow.

Our individual and societal hierarchies of evil are very much determined by our cultural context; we can see this in intercultural synchronic variation as well as diachronic intracultural variation. If you were to ask the average citizen of 1950s England to sketch their hierarchy of evil, where would they place discrimination based on sexual orientation compared to that based on other characteristics? In contrast, where would sexual orientation-based discrimination rank in modern-day England? If you were to ask Western Christian or Christian-heritage people to sketch their hierarchy of evil, where would the murder of cows, pigs and dogs fit in? Compare this with Hindus who view the cow as sacred, Muslims who consider the consumption of pigs to be haram (forbidden by Allah), or China where, though technically outlawed, dog meat remains commonplace in certain regions. On what objective, non-religious basis can a distinction be made between cows, pigs and dogs that deems one to be more worthy of empathy and less game for slaughter? Not so long ago we would have deemed discrimination based on sexual orientation, race or gender to be just – increases in vegetarianism and veganism suggest we are beginning to open up to the truth that we have no solid basis on which to consider the murder of dogs any more evil than the murder of cows or pigs, or the murder of non-humans any less evil than the murder of humans. On what basis can we really distinguish the two?

It is clear that we are constantly evolving in our ability to accept and empathise with those who exhibit difference. This should not be taken as evidence of how wrong we once were and how wrong other cultures may currently be, so much as evidence that society as a whole is largely ignorant to its faults until it has transcended them. We should be wary of the fact that we are constantly evolving, and that this likely means that the present is not perfect. We need to be conscious that we consider condoned evil lesser than condemned evil on no basis other than such labels (see the “War on Drugs” and similar – what's the real hierarchy of negative physiological impact with marijuana, alcohol and tobacco?). We also need to be aware that some evil is so deep-rooted that the vast majority of society is ignorant to its very existence, let alone that their (or our) discriminations are unfounded. What are we currently missing?

One such evil could be amorous structure. The majority of Western society never reflects on or questions the importance or unimportance of monamory and monogamy. This is because the concept of two-person units is so deep-rooted and encouraged as one of life's ultimate goals (alongside having children and economic success, both of which are far more often critically examined as priorities in contemporary Western society) that many of us are ignorant to the fact that things could be different. Take Islam again, which, whilst uncommon, does in some countries permit its followers to live in polygamous set-ups. Yes, it is only polygyny (men with multiple wives) and not polyandry (women with multiple husbands) that is accepted, which is problematic from a feminist perspective, but, contrary to typical Western cultural assumptions, could it be possible that each of these relationships is valued and not simply greed-based? Are we exempt from sexual and/or romantic feelings towards any individual who is not our partner when in monogamous relationships? Or is the fact that these feelings are unavoidable and commonplace, as well as action based on these feelings (infidelity), evidence that it is entirely natural? Is it harmful to try to suppress these feelings – does this lead to unhealthy relationships with a lack of trust and subsequently respect between partners? Does our conformity to traditional Western amorous structures limit our potential to engage freely with our emotions? The majority of society is entirely ignorant to these questions and the fact that it could be different and dismissive of cultures in which it is. Yet, there are an increasing number of people who are beginning to engage with these questions and who are challenging cultural assumptions of morality by living in consensual, happy polygamous relationships. Could this be one of the next evils (or cultural assumptions/norms) we begin to tackle? A few decades down the line, will we see polyamory and polygamy as the norm, or at least respectively as a morally-neutral state and option? Will same-sex marriage really lead to polygamous relationships, just as the homophobes had feared? Is that a bad thing?

One area in which we’re currently seeing shifts is trans rights and acceptance. Society is increasingly engaging with trans identities (Stonewall just went LGBT!), and in doing so normalising trans people. Non-binary identities are in a similar, though slightly more advanced, position to polyamory. People are increasingly engaging with the fact that gender is not just one or the other, but rather spectrums of identity and expression, and that our binary notions and norms are at least to some extent socially constructed.

All of this is evidence that we are not perfect, and that we have no real basis on which to be confused by the past or foreign cultures’ or societies’ condonement of evils that rank highly in our own cultures’ or societies’ hierarchies of evil. We need to understand that our hierarchies of evil are still evolving, and practice currently considered acceptable (or perhaps not even considered) may well not be in the near or distant future.

So, whilst my own identity may be erased, challenged or discriminated against by my own or other modern day cultures and societies, I don’t dislike or hate anyone, as I acknowledge the mechanistic nature of society and its people. Though we like to see ourselves as a species as highly individual and diverse – a notion that may or may not have merit – we are very much part of a swarm largely moving in the same direction en masse, with some level of individual variation and a few mavericks. We are a product of our context: who we interact with, the messages we are subject to and so on. We don’t get a choice before we are born to pick our character, rather our character is given to us and formed and reformed by the people around us; this principle applies to all people including those who may reject our identity. I don’t dislike or hate anyone, no matter how much I disagree with their values or opinions, as I know that they are a product of their context. I may dislike the product, but the person is never the engineer of that product. Of course, the person does make choices, but the choices they make are ultimately informed by their context – the person’s development influences the way they make choices and their level of engagement with social deviance and critical thought. We don’t get to pick these things. Our ability to choose our actions and the process through which we do this is not our choice – it is externally determined. On a fundamental level, a person’s character is out of their control. Therefore, I can dislike the product or its discriminatory result, but not the person behind it as they are not in control of who they become. The hate is unrequited.

“Maya Angelou Hate, it has caused a lot of problems in the world, but has not solved one yet” by BK is licensed under CC BY-SA 2.0.